I had a bad day yesterday. First I overslept by an hour, then I was completely unfocused at school – and to top it off, I overcooked my yummy-looking fish.

There was only one solution – yoga. I used to do it regularly, but that’s years ago now. However, I’ve been thinking about getting back to it. Stretching, lots of breathing, and relaxing – sounds like what every stressed out student needs, right?

Wrong. Oh so very, very wrong. Twist this way, bend that way, and get those elbows to the floor! It was torture to peaceful music. To make matters worse, my mokey mind refused to shut up. It kept going on about push-pause injections, and oh-my-god-this-pose-hurts.

“Two blood cells met and fell in love. But alas it was all in vein.” 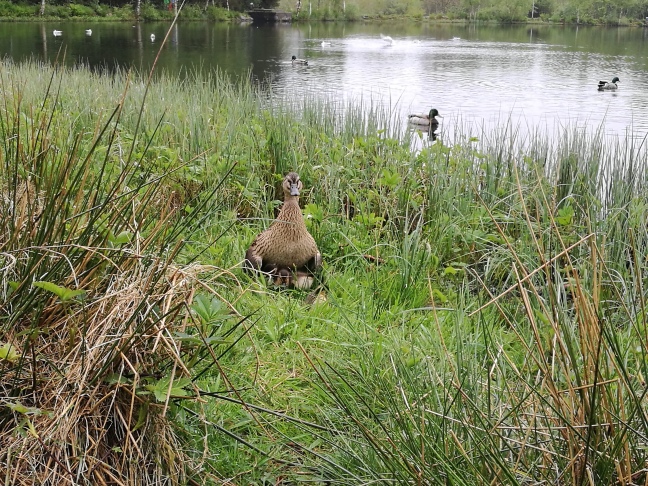 I feel like ducklings make the world a better place. Happy people are usually kinder, and I have never met anyone who was not happy after meeting a duckling.
Conclusion: the world needs more ducklings.

Most people have been there; in a large room getting warmer by the minute. Filled with too many students. The only sounds the lecturer’s voice and fingers on keyboards. I wish.

1. The sleeper. No matter how much I concentrate – I can’t shut out her snoring. I (barely) resist the urge to “accidentally” spill my water on her.

3. The loud whisperer. The guy whispering none-stop to the girl next to him. Ten bucks they’re together before the semester ends.

4. The writer. He notes everything the lecturer says, and has ink from his pen smeared over his left chin. He’s going to get an A in this, I just know it.

5. The new girl. Unsure of what kind of student she is, she sits almost at the front. She’s twirling a pen between her fingers, trying to ignore all the distractions around her. Trying to ignore all the distractions in her own head. However, she fails and starts thinking about the world outside the crowded room – and her pen slips between her fingers and flies into the back of the head of the guy in front of her.

Yes, that last person is me.

I went fishing the other day, which to me means that I picked up a fishing rod, found water and hoped for the best. I don’t have any knowledge of hooks or techniques so when I fish it’s all about patience (and admitedly, a little bit of “oh, oh, I’ve got one!! I’ve got one! Must be bi-… oh… Seaweed…”) 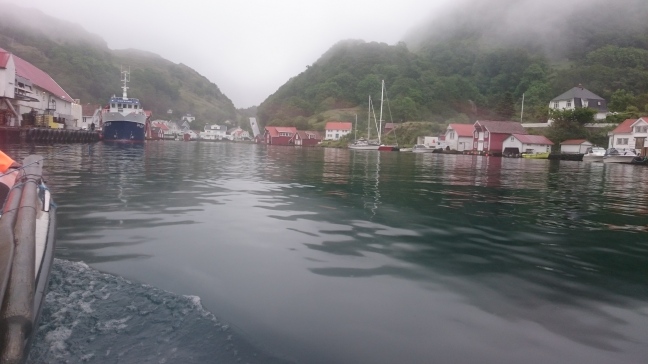 Standing there, waiting, I watched the sea. No fish for me. Out of the blue, I remembered. I promised you guys a Great Barrier Reef post when I received the pictures. It’s been a while since I left Australia, but here goes anyway:

Ready for another adventure!

I snorkled in the Great Barrier Reef for hours. Time just swam past, together with a surprisingly fast sea turtle. The Reef has a surreal amount of pink, orange and other colors we don’t usually associate with the sea. It’s hard to believe that the Reef is dying, that it used to be even more spectacular. 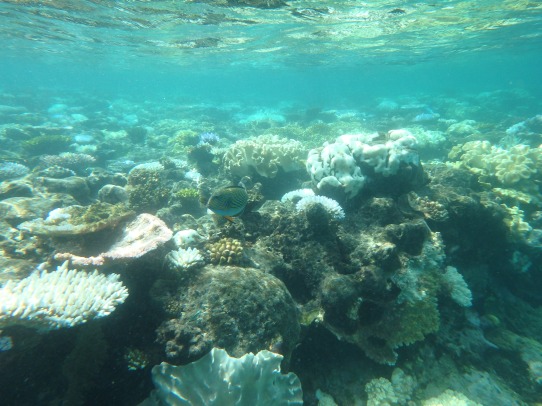 Even though the turtle was great, the corals were beautiful, the highlight of the excursion was my shark encounter(s). I suddenly spotted a Reef Shark. A rash decision later, I swam after it. I followed it around and over corals, through narrow passages, and I enjoyed myself immensely. Until I rounded a corner and met his father.

Please excuse the quality – I was very surprised!

Thankfully, the Grey Nurse Shark didn’t think too much of me – anyone without fins wouldn’t be good enough for his son, and took a u-turn. By the time I dared to breathe again, the Reef Shark was gone. He’ll forever be the one that got away.

Australia is a fascinating country. Big and beautiful, sandy and sunny, but seldom in the news. I learned a lot about it when I visited, maybe more than an average Australian knows. How many of you reading this can name the Australian Prime Minister? Without googling it. Here’s some facts everyone should know – if so only because they are fun.

This is how the reef looks from above the surface.

3. In 1967 they lost and never found Prime Minister Harald Holt. 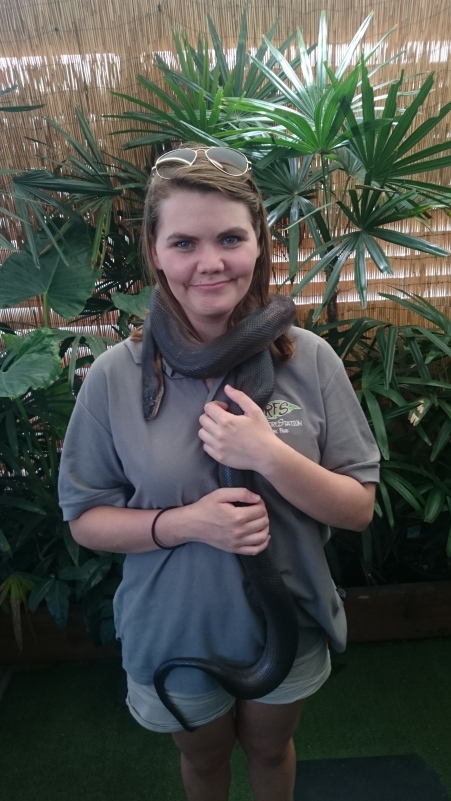 Thankfully, this isn’t one of them.

5. Australia is the only Western country that doesn’t have a Bill of Rights.

They are just as friendly as their two-legged friends.

7. The city of Melbourne used to be called Batmanina.

8. The Selfie is an Australian invention

He was too busy trying to figure out if I had food to smile for this picture.

P.S. This post was inspired by the first chapter of Down Under by Bill Bryson – a must read for anyone planing to go to Australia. Oh, and I googled it, and the prime minister’s name is Malcolm Turnbull.

“What are you so happy about?” My two supervisors look up when I enter the prep room, busy not doing their job.
“Nothing,” I say with too big of a smile. They lift their eybrows.
“Okay, so I finally managed to get a decent selfie with a kangaroo!”
“That’s great!” one of them respond in that kind of overbearing way you do when someone is excited about something you can do every day. “Well, let’s see it then,” the other one adds. Hesitating for a moment I wonder if it’s actually a good enough photo to show, but then I figure that if anyone knows how difficult it is to get a joey to hold still – it has to be them.

Bon Jovi, a cutie rescued from the wild after his mother died.

I hold out my phone and watch their faces. For a moment no one says anything. Another moment passes and they exchange looks. “I know it wasn’t the best photo, but seriously, I wasn’t that bad,” I finally say, defensively.
“It’s not the quality,” is that surpressed laughter I detect?
“It’s just that, this isn’t a kangaroo…”
I blink “what? What do you mean it’s not a kangaroo, of course it is!” I take back my phone to ensure that they are looking at me with the cutest joey ever.
“This is Bon Jovi, right?” They ask.
“Yeah,” I’m beginning to feel stupid, they’re not joking, but the picture obviously shows me with a kangaroo. Doesn’t it?

Can you spot the joey in this photo? These guys didn’t want to take a selfie with me, no matter how hard I tried to persuade them. I was literally left in the dust – as they hopped along.

“Bon Jovi is what we call a wallaby. Wallabies look like kangaroos, but are smaller.”
“But, but- He said he’d show me the kangaroos!” I point out the open door as if they would automatically know who I mean by staring into the trees outside. “He, whoever that may be, probably did show you, they are usually around the same area. You just, understandably, chose the cutest one, that just so happens to be a wallaby…”
“I hate Australian wildlife.”
“Just because you mistook a dingo for a dog, and a wallaby for a kangaroo? No worries mate! You’ll get the hang of it!”

This folks, is a kangaroo. The one at the bottom, that is.

P.S. For those of you who asked, the snake I held in my last post is a scrub python. It is not that dangerous! The snake has to be much bigger before it can squeeze the life out of me;)

My Most Liked Posts

Want me to do a guest post on your blog, or want to do one on mine? Send me an email at ragnhild0@hotmail.com and we'll talk!